Rents are down nationwide, but is the decline of urban multifamily already over? 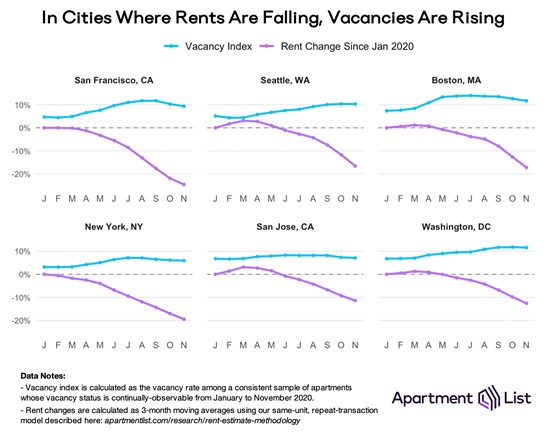 Rental search platform ApartmentList has released their national rent index report. The report, informed by a modified calculation, found rents have fallen 1.3% nationwide year over year. It showed, as well, where rents have fallen most dramatically and which multifamily rental markets have actually seen upswings in the pandemic.

Rob Warnock, research associate at ApartmentList, broke down the data in greater detail. He explained that the drops and rise have played out, regionally, as would largely be expected during the pandemic, with major metro areas suffering declining rents and small cities, suburbs, and ex-urbs benefitting from urban flight and the availability of work from home infrastructure. He pointed, however, to a potential plateau in urban vacancy rates that could imply those markets have already hit bottom. He highlighted where, and how, mortgage professionals can position themselves to win out in this environment.

“Since we started measuring in 2017, during the summer rents have gone up nationally, on average between two and 3%,” Warnock said when asked to contextualize this 1.3% drop. “We know that those were years where the economy was growing but using other measures we know that rents were going up pretty continuously all the way back to the Great Recession about 12 years ago…This is really the first year since the Great Recession where, during the busy summer months, rents saw the sort of dramatic national drop that we have right now.”

That 1.3% drop, Warnock explained, is the composite of a few very expensive cities. Those high-priced rental markets in cities like San Francisco, New York, and Seattle have dropped significantly. Many of the smaller markets, conversely, have not seen much of a drop and some have actually seen a gain during the pandemic. On the top of the small-market growth list is the city of Boise, Idaho where Warnock said rents have grown at a double-digit percentage rate since the start of the pandemic.

Boise might be the ideal COVID-19 real estate market. Nestled in the Rockies it has the access to nature many younger renters crave, as a college town it has a young population and an energetic feeling, and it has the benefit of momentum behind it. Warnock said Boise has been growing for a long time already and was top of mind for many city dwellers, especially on the West Coast, when the pandemic hit.

As rents have declined in major cities, vacancy rates have gone up. Warnock explained that this measure was in keeping with less attractive multifamily urban centers in these cities. That said, he noted that recently those vacancy rates have begun to plateau and even slowly decline in major cities. He thinks this could mean that these markets have hit bottom and are beginning a slow recovery. 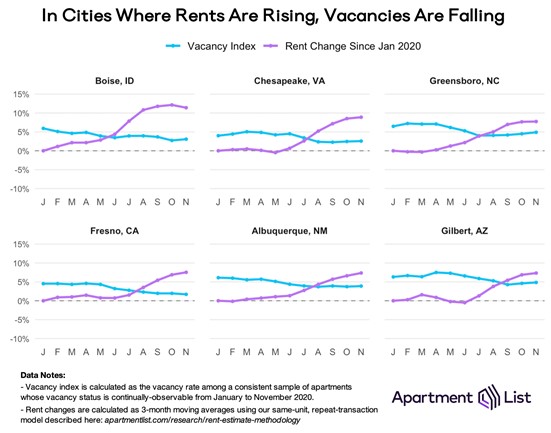 In the meantime, renters, landlords, and mortgage professionals in major urban centers should be ready for renters markets.’ In cities like Boise, mortgage pros can expect landlords to wield much more clout.

“Landlords definitely like don’t have leverage in the market that they’re used to,” Warnock said. “The relationship between landlords and tenants in cities like San Francisco is really flipped. There’s just a lot less demand in the market, and a lot less leverage to command the same rent prices. The opposite is true in some of these smaller more affordable markets where, despite the economic uncertainty that a lot of people are facing, there’s still so much demand in the market that landlords and property managers are still able to be picky with who they choose and are still able to leverage the competition in the market to command high rent prices.”