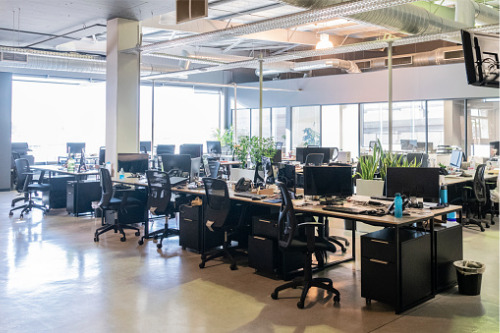 US tech behemoths have become an increasingly dominant force in the US commercial real estate market amid economic ambiguity and the rising popularity of remote work, the Wall Street Journal reported on Tuesday.

Five of the largest property owners in the tech industry – Amazon, Facebook, Apple, Google parent Alphabet, and Microsoft – continued to lease and acquire large swaths of office space when others are delaying property transactions

The five tech titans together occupy approximately 589 million square feet of US real estate, five times more than in 2010, according to CoStar Group. That is more than all the office space in New York City or equivalent to about 220 Empire State Buildings.

As of September, Alphabet alone owned $39.9 billion in land and buildings (not including properties under development), up from $4 billion a decade ago, according to a filing with the Securities and Exchange Commission. Amazon followed with $39.2 billion in real estate at the end of last year, slightly more than $1 billion higher than in 2010.

“This is maybe the best opportunity that ever existed in the real estate industry,” Roy March, chief executive of real-estate investment bank Eastdil Secured, told WSJ. “I don’t think we’ve ever had this kind of demand that’s being driven out of a sector since the invention of the internal combustion engine.”

Facebook, Microsoft, and Google said that they would support telecommuting beyond the pandemic. However, their appetite for warehouses, data centers, retail stores, and even more office space continued to grow. In 2020 alone, the firms have expanded in the CRE space by more than 25% – the fastest rate over the past 10 years.

The tech companies are using their vast cash reserves to snap up real estate in big metros instead of leasing office space, according to the WSJ.

Google’s first big real estate purchase was a $1.8 billion office building in Manhattan’s Chelsea neighborhood. The acquisition put an end to New York’s housing market crisis and “sparked a yearslong boom in prices,” the report said citing said Douglas Harmon, chairman of capital markets at Cushman & Wakefield, who brokered the deal. Google has leased more office space in the area and bought another nearby building for $2.4 billion.

Partly due to Google’s expansion, office rents and apartment prices in the area rose faster than the Manhattan average over the last 10 years. The expansion also resulted in an influx of employees looking for apartments within walking distance from work – helping boost retail, restaurants, and other businesses.

“Technology tenants tend to create ecosystems, just like financial services tenants did when they dominated skylines around the city,” said Michael Turner, president of Oxford Properties Group, which leased to Google an office building in Hudson Square in 2019.

However, the firms have impacted longtime residents, bumping up apartment rents and making cities less affordable for many. After some backlash from residents and politicians, the five tech companies have pledged to earmark billions for the creation of affordable housing, “but the sums are far too small to offset their impact on apartment rents,” the WSJ said.

The tech giants are now the biggest source of new demand for real estate and are pushing home prices up, according to Victor Hoskins, head of the Fairfax County Economic Development Authority.

Last year, Amazon opened its first office campus in Arlington, Va. and is committed to hiring 25,000 new employees over the next decade. “The closer you get to the Amazon campus,” Hoskins told the WSJ, “the higher the spike.”